Broach refers to the tool for the majority of heavy-duty tool and fine sharpener, which is mainly installed in broaching machine.

Broach is a kind of high productivity and high precision multi thread tool. It can broach various shapes of internal surface (e.g. circular hole, polygonal hole and various spline holes) and external surface (e.g. indentation at the root of the blades of steam turbine, external gear, semicircle orifice of connecting bar and rabbet surface etc.) The broach used to broach the internal surface is called inside broach, and the broach used to broach the external broach is called broach. The majority of the broaching forces are tensile forces, however some are compression forces. The broach under compression force is called broach, and the broach under thrust is called pushing broach. Considering the stability, pushing broach is relatively short.

When operating, broach has many modes of motion, such rectilinear motion, circular motion, broach motion, work piece motion and simultaneous motion of work piece and broach. In the majority of the conditions, when the broach is working, the work pieces are fixed and the broach performs rectilinear motions. The feed motion of the broach is generally achieved by gradually increase the size of cutter tooth. For normal broach, the difference between the two consecutive cutter tooth or radius size is called rise per tooth, which is, generally, the broaching thickness. Generally, the rise per tooth of broach is small, only scores of micrometers.

Broach is dedicated cutting tools, and it is economic to be used for mass or batch production for its high manufacturing expense. However, if the shape and size of the processing surface have been standardized, the broach can be serialized and produced in batches under the organization of the tooling plant. In small batch production, good economic effect can also be achieved. The broaches used for broaching standard circle and spline hole have been standardized.

The broaching speed of broach is generally slow, and 0.017-0.13m/s is commonly used. And the broaching thickness is very thin. Therefore, the surface finish is relatively high, normally, it can reach ▽5~▽7. The rate of wear of the cutter tooth is very slow, and the cutter tooth has very high durability and machining precision, which can reach 1T7~9 grade when broaching holes and even 1T6 and ▽8~▽9 grade if extrusion ring is equipped at the end of the broach. The productivity of the broach is very high and this is because the number of the working tooth is large and working cutting edge of each tooth is long, furthermore, rough and fine finishing can be achieved in one working stroke. 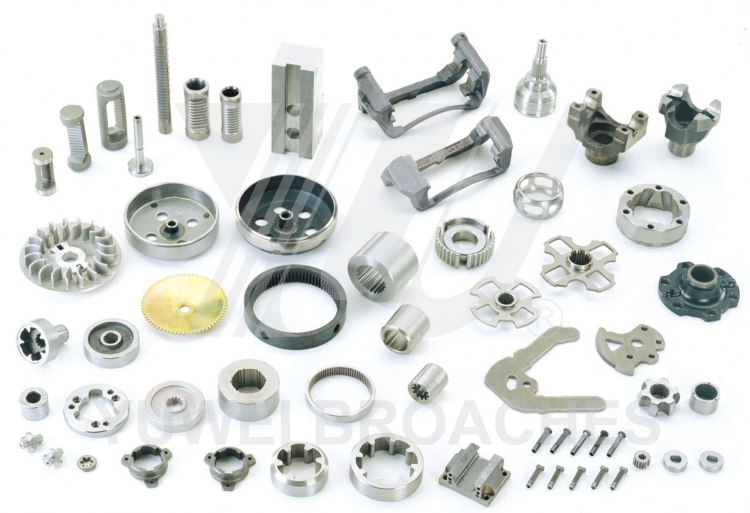